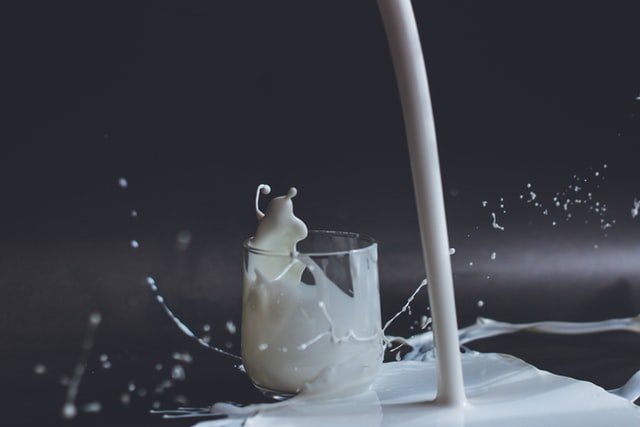 Whenever we hear about pets drinking milk, a picture of a cat licking milk from her bowl almost always comes up in our minds. What’s surprising is the fact that cats shouldn’t ever be poured bowls of milk. But the same question about their four-legged counterparts is a lot trickier. So, let us look into the controversies regarding milk for dogs.

Let us clarify by saying that no simple yes or no would suffice to answer the question regarding dogs drinking milk. Instead, let us look into the different kinds of milk and some non-dairy and lactose-free milk like almond, oat milk and look at the benefits provided by them when your dog drinks each of them.

What happens if a dog drinks milk?

When dogs are in their pup stage, they drink their mother’s milk as they have lactase enzymes in abundance in them. However, once they get accustomed to foods other than their mother’s milk, they generally become lactose intolerant. So, dairy products are not advisable for your dog. Milk and dairy products are also responsible for triggering various food allergies in dogs, leading to GI tract infection and other issues.

Barring occasionally licking tops of ice cream cones or spilt coffee (unless your dog is allergic), you should avoid providing your dog with conventional milk or any other dairy product. Instead, if you are insistent on feeding milk to your dog, opt for non-dairy options like almond and oat milk. Let us now look at the benefits and side-effects of oat and almond milk for dogs.

Is Almond milk safe for dogs?

Can dogs drink almond milk? Since we cannot feel directly inside a dog’s body, we cannot answer directly to this. But, mostly, a balanced amount of almond will be safe for your dog and is beneficial in some respects. However, regular consumption of almond milk is not advised as almond milk is high in calories and daily consumption can cause adverse effects to his body.

So, to answer the question can dogs have almond milk, you should be careful while serving almond milk to dogs, as high amounts of almond milk can be problematic for your dogs. But, unlike other nuts, almond is not toxic by nature and hence, the problems dogs may face from almond milk are generally restricted to digestion issues as almond milk has a high-fat content.

Contact your vet if oily and watery diarrhoea is shown by your dog after consuming almond milk. Now, is almond milk good for dogs? Yes, provided they are supplied in small amounts in the form of a treat or as a supplement to their diet, once or twice a week. Almond milk is high in good fat content, but too much or prolonged consumption can lead to problems like pancreatitis in your dog.

Some good brands of almond milk for dogs are –

Being lactose-free, oat milk is safer to provide to your dog than other lactose-filled dairy kinds of milk. Oat milk is generally healthier than other standard sources of milk because it is comparatively lower in sugar or fat content compared to other lactose-free non-dairy kind kinds of milk like almond milk. Being low in sugar or fat, oat milk won’t make your dog get fat and lethargic by making them gain weight.

Despite all the plus points of oat milk, it is not very prudent to provide your dog with oat milk for a prolonged period or too frequently, just like almond milk. Milk is not a necessary part of a dog’s diet, and prolonged use can lead to GI tract issues of your dog. Bottomline – can dogs have oat milk? Yes, they can. But use it as a special treat to reap the benefits and avoid digestive issues for your dog.

Opting for non-dairy lactose free milk for dogs is always a good option as dogs are generally lactose-intolerant. However, some ingredients which constitute non-dairy milk products can pose certain problems for your dog. Some of the substances that you should positively avoid by any means while providing almond and oat milk for your dogs are as follows –

Too much of anything is never a good thing. The same is true for milk for dogs. Whether you opt for conventional milk products or newer non-dairy milk products like oat or almond milk for dogs, consumption in large amounts or regular consumption almost always leads to some problems. Rather, use milk as a treat or supplement and reap the benefits.

The Usefulness Of Pyrantel For Dogs

Treating Dogs For Parasites With ZoGuard Plus

Importance Of Yak Cheese For Dogs